He said, “I am the Smokey Mirror, because I am looking at myself in all of you, but we don’t recognize each other because of the smoke in-between us. The smoke is the dream, and the mirror is you, the dreamer.” 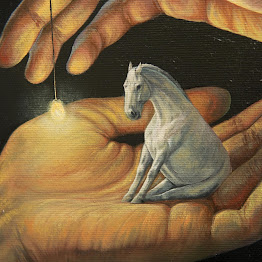 This past Monday, I was at a foxhunting facility that is usually very busy. For whatever reason, it happened to be quiet that afternoon. It was a nice surprise. I was thankful for the chance to share some peaceful time with the horse I’d come to see. He and I have known each other for a long time!

His body’s conformation is unusual and requires significant upkeep, but he is a remarkably talented athlete and a real charmer, to boot. His sessions almost always involve a combination of manual therapy, proprioceptive exercises, cold laser, and energy work. This day was no different, except we were wrapped in the gift of quiet, together. I couldn’t help noticing how comforted we both felt. It’s amazing how stillness never feels lonely, when we realize we’re always sharing it with someone or something else.

He looked at the stars again, and he realized that it’s not the stars that create light, but rather light that creates the stars. “Everything is made of light,” he said, “and the space in-between isn’t empty.”

I was standing on my stepstool, in order to effectively reach the top of his body. I had my back to the barn aisle. I heard a soft nicker, and then an even softer female voice: “Hi, Friend!” said the voice, “Hi!! Hi, Friend!” I could tell from her tone that she was smiling as she said it. Out of curiosity, I peeked over my shoulder.

I saw an owner I’d never seen there before. She was probably 55-60 years old. Her unkempt bob-cut hair swung a little as she ambled up to her horse’s stall. Her glasses sat a bit crooked on her face. She wore a bright orange polo shirt that was tucked into her khaki Carhartt pants, which were tucked into her knee-high muck boots. Her belt matched her shirt. She carried a herringbone purse in one hand and a grooming box in the other. She smiled like a little girl.

Her horse looked like some type of Saddlebred cross, sway-backed in his old age. He was a lovely liver chestnut color. There was some gray in his face. His ears sat close together and were perked completely forward, at her. His eyes sparkled. He arched his neck and marched in place in his stall, pushing his nose between the bars of the door, licking his lips. As she hastened towards him, he looked to the horses on either side as if to say, “You see her? That’s my best friend! She’s mine! She’s here for ME!!”

They were mesmerized by each other. It was as if they hadn’t seen each other in a million years. And yet, it was easy to tell they are together every single day.

“The real us is pure love, pure light,” he said.

Like a fly on the wall, I witnessed their caring interactions. Her sole purpose for the visit was to groom him, talk to him, touch him, give him occasional treats. I overheard her asking him questions he couldn’t answer, reassuring him when he became excited about the goings-on outside, giggling at antics she’s probably managed for years, thanking him for everything under the sun. His eyes followed her everywhere. He hung on every one of her gentle, whimsical words.

I thought about introducing myself, maybe asking to take their picture, making some chit-chat, learning their story. But there was no need. I snuck out quietly, without either of them ever knowing I was there.

Witnessing a love like that was a blessing. It was also a reminder: horses have served us for thousands of years, and still do, in spades. But there is no reason our relationships with them need ever be utilitarian. We owe them and all other living things our gratitude…not only for what they’ve done for us, but for who they are, and for the life we know only through each other.

He looked at his hands, he felt his body, and he heard his own voice say, “I am made of light; I am made of stars.”

He saw himself in everything – in every human, in every animal, in every tree, in the water, in the rain, in the clouds, in the earth.

He was very excited, and his heart was filled with peace.

-excerpts from The Four Agreements by Don Miguel Ruiz